By the Numbers: Edge Cybersecurity in Healthcare

What’s now deemed as the global Internet of Medical Things (IoMT) market is expected to reach $158 billion in 2022. Other reports estimate that the remote monitoring for healthcare could be worth $1.1 trillion by 2025 and that the market for connected medical devices is projected to reach $94.32 billion by 2026.
The potential of growing connected devices and emerging innovations is profound and far reaching, all with the goal of providing improved patient care and protecting sensitive data and patient integrity.
US hospitals report between 10 to 15 connected medical devices per patient bed with estimates noting there are more than 350,000 connected devices in large hospitals. Another digital acceleration trend in the healthcare industry to consider is consumer virtual care where patients can see a clinician anytime and anywhere thanks to secure devices using video, mobile, cloud, and IoT technologies.
The adoption of new technologies, tools, and care models is gaining significant momentum in the healthcare industry. In fact, the healthcare industry has introduced and adopted a growing number of Edge and IoT devices to environments ranging from tablets, wearables, monitors, and AI-powered imaging devices. The more devices there are, the bigger the vulnerabilities in number and complexity.
While there’s not a one-size-fits-all approach to healthcare security for the variety of cases deployed, proactive security measures can be a game changer to avoid pitfalls that can potentially endanger the quality of care and the privacy implications of Edge use computing.
According to AT&T’s “2022 Securing the Edge” report, the top concern among healthcare security architects and leaders is ransomware, followed by attacks against servers or data at the network Edge and attacks against cloud workloads. Other attack vectors of concern include supply chain attacks and attacks against user/endpoint devices. 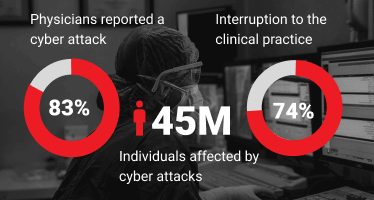 We are going through a highly critical phase in healthcare where the entire industry needs to commit to high standards in data privacy, transparency, and control. Cybersecurity is a key priority in any healthcare agenda, as over 83% of physicians reported to have experienced a cyber attack. The findings also suggest that 74% of respondents cited interruption to their clinical practice as primary concern and 29% of respondents in mid-sized healthcare organizations said it takes up to a full day to recover from an attack. Ransomware cost hospitals close to $21 billion in losses in 2021.
Here are some of the most common risk use cases in healthcare at the Edge and IoT infrastructures.

Cyber attacks create mistrust and can have a negative impact on the adoption of new technology. Stolen medical records can be used to conduct fraudulent acts such as receiving reimbursements for healthcare services or impersonate an individual for other fraudulent acts.
Cybersecurity breaches were significantly high in 2021, exposing record amounts of patient’s protected health information (PHI), with a report claiming over 45 million individuals were affected by healthcare attacks in 2021.
The health industry is highly targeted, more so than any other industry, with data breaches. Data breaches are typically caused by incidents such as credential-stealing malware, insiders who purposefully or accidentally disclose patient data, lost devices, and more.

Hackers can gain access to personal information from patients like credit card numbers and passwords.
In healthcare, phishing attacks traditionally have two objectives, to gain access to PHI or to deliver ransomware. PHI is a valuable commodity that can be used by bad actors to create false identities, get free medical treatment, or commit insurance fraud.
PHI databases are more valuable than regular personally identifiable information (PII) in the black market on the dark web, prompting bad actors to relentlessly attack PHI for personal gain. 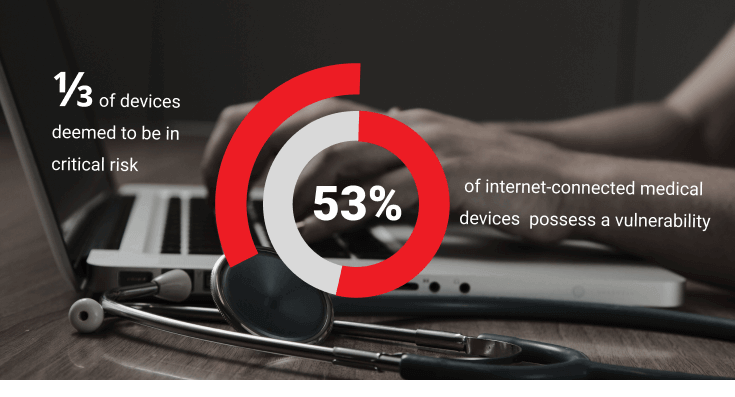 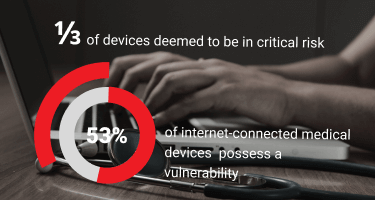 Ranging from handheld medical devices to camera sensors, there are billions of connected devices thanks to IoT in healthcare. Hackers exploit weak points in these connections to access systems with personal patient data.
According to a report from 2022 that looked over 10 million medical devices across more than 300 global hospitals and medical facilities, 53% of internet-connected medical devices analyzed were found to possess a vulnerability, with ⅓ of devices deemed to be in critical risk.
For instance, infusion pumps can be vulnerable as they take up to 38% of a hospital’s IoT. Vulnerabilities come from simple things such as outdated programs, old operating system versions, or weak default credentials.
82% of healthcare organizations have reported an IoT-focused cyberattack.
Over 50% of internet-connected devices found in hospitals are deemed vulnerable to cyber attacks.

Healthcare Edge computing has been accelerating because of the COVID-19 health crisis that started out in March 2020. The concepts of hospitals at home and virtual home care are acting as early adopters of a more mature adoption of security measures.
As Edge capabilities are increasing, there will be more use cases enabled including tele-emergency medical services and autonomous mobile robots and drones, to name a few. The benefits of connectivity in healthcare are clear, but the resulting increased vulnerabilities which can steal sensitive medical data, execute targeted attacks against care providers Edge and IoT infrastructures, and more.
AI EdgeLabs is a robust, enterprise-grade, and AI-based platform that brings advanced network visibility, early threat detection, and automated incident response and remediation vital for the newest technologies for the healthcare industry.
For healthcare it’s very important that sensitive clients' data should be protected properly and processed inside the hospital without leaving the security perimeter. AI Edge Labs software Sensor guarantees local data-processing when network verification happens on place without transfer outside sensitive network metrics.
Edge sensors can be deployed in a number of different configurations on the side of the Edge IoT Gateway in order to protect connectivity from Iot/OT equipment from the side of the hospital and potential clients that visit the hospital and can interfere into systems including visibility of the public areas. 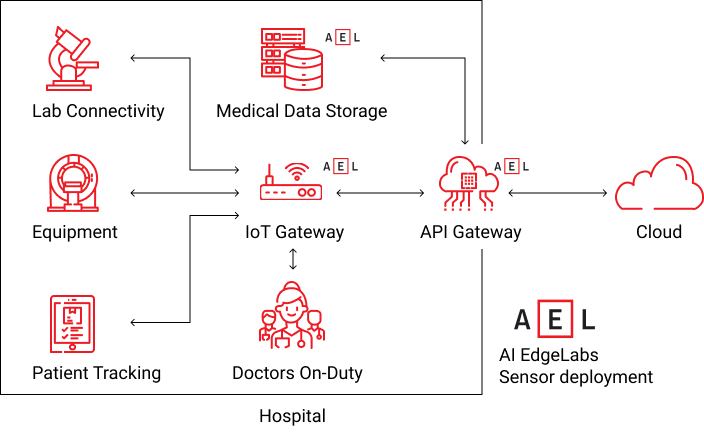 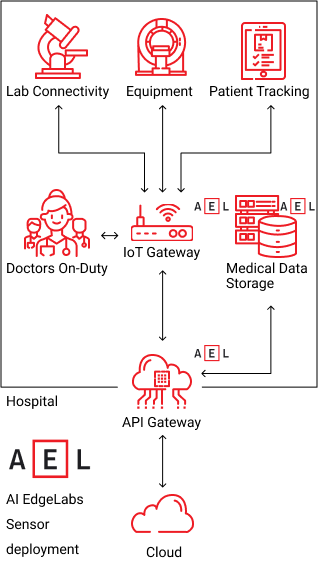 Deployment on the edge servers and API gateways are possible too. For example deployment on API Gateway is important when public IP exposing API services outside and provides some services for example access to clients data or visit to doctor to particular hospital.
Edge Labs can provide the highest degree of security and visibility for network intrusion detection and automate remediation techniques for the attacks: network flooding, scanning and ddos attacks can be quickly detected, reported to SOC team and remediated properly.
AI EdgeLabs is a robust, enterprise-grade, and AI-based platform that brings advanced network visibility, early threat detection, and automated incident response and remediation vital for the healthcare industry. Enriched with Deep Reinforcement Learning, our platform is smart and impressively accurate in detecting threats before they even have a chance to cause harm.
Download our Healthcare Cyber Threat Landscape infographic PDF file. 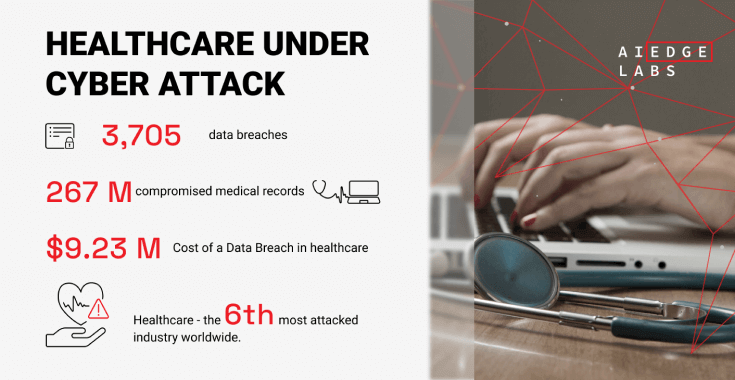